Eurycoma longifolia jack (E.L) root extract has become famous for giving enhanced sexual performance ability through elevation of serum testosterone levels in males. However, although very widely used, it’s possible adverse effects are poorly studied .The objective of this study is to find out if there are any pathological changes that occur in the prostate of rats due to consumption of E.L. root extract. Methodology:45 male rats where used in this study , they were divided into three groups ,group(A) contain 5 rats that represent the control group who did not receive any treatment, group (B) with 20 rats ,received 5mg/Kg twice daily of 100:1 freeze dried water extract of Eurycoma longifolia Jack roots and group (C) with 20 rats received 10mg/kg body weight twice daily of the same extract .The duration of treatment for both groups was 4 weeks. At the end of the experiment, blood was obtained from the rats and serum testosterone level (T) was analyzed. The rats were then terminated and the prostate was removed, weighed and its dimensions measured, then it was processed into haematoxiline and eosin stained slides which were observed under light microscope. Results: Group C showed a significant increase in prostate size, weight and serum T. Histopathological examination of the specimens revealed that there were no significant observable changes in group B in comparison with the control group while group C showed a marked cell proliferation of the prostatic gland lining epithelium that appeared as stratification and intraglandular villus formation of the usual single layer columnar epithelium.
Areas of mild dysplastic changes were observed in the lining epithelium characterized by nuclear enlargement and irregularities in the nuclear membrane and hyperchromatism. These dysplastic changes were equivalent to low grade prostatic intraepithelial neoplasia PIN. Conclusion: E.L. root extract can cause abnormal proliferation in the prostatic epithelium and these changes are dose dependant.
Keywords: Eurycoma longifolia jack, Prostate, Rat, Dysplasia, Testosterone.

Eurycoma Iongifolia Jack (E.L),which is known as Tongkat Ali is a plant which grows up to10 meters high and is found in primary and secondary evergreen and mixed deciduous forests in Burma, China, Thailand, Malaysia, Sumatra, Borneo and the Philippines (Osman et al., 2003).
Over the years this plant has been shown to exhibit antimalarial (Chan et al., 1968; Chan et al., 1989), cytotoxic (Kardono et al., 1991); (Itokawa et al., 1992) antiulcer (Tada et al., 1991) and antipyretic (Chan et al., 1995) activities and these may have been attributed to various quassinoids, squalene derivatives, biphenylneolignans, tirucallane-type triterpenes, canthine-6-one and l~-carboline alkaloids (Gimlette and Thomson, 1977).
However, this plant has gained notoriety as a sexual enhancer since it is reputed to improve strength and power during sexual activities; it increases male virility and sexual prowess and it is usually taken as a decoction of the roots in water. Scientists have studied Eurycoma longifolia’s effect on lab rats and found that it enhances sexual characteristics and performance in rodents (Ang et al., 2003); (Ang and Cheang, 2001) other studies also reported that the plasma testosterone level of Eurycoma longifolia extract treated rats was significantly increased when compared with that of the control and infertile animals (Chan et al., 2009).
Studies of the effect of Tongkat Ali extract on male patients reported a significant increase in serum testosterone concentration after administration of the water soluble extract (Tambi et al., 2012)
Although Tongkat Ali has become well known and is used liberally as homemade root extract or sold as tablets with specific concentration or even mixed with tea and coffee, very little is known about possible side effects of long-term consumption of the root extract of this plant.
The aim of our study is to investigate the possible histopathological effects on the prostate gland that result from continued use of different doses of E.L. root extract, the main concern for the potential adverse effects is the increased testosterone level which may affect the prostate as androgens play a permissive role in the development of prostatic intraepithelial neoplasia and benign prostate hyperplasia (Claus Rolf et al., 1998)

This work was done using International Islamic University Malaysia research grant number EDW B 11-066-0544 (Endowment type B grant)
The water soluble ,freeze dried extract was purchased from L.jack Sdn.Bhd. company in Malaysia .Its concentration is 100:1 meaning that to produce 1 gram of extract, 100 grams of E.L. roots were used. We were supplied with a certificate of pureness and concentration from the company.
Forty five sexually mature male albino Wistar rats where used in this study, they were kept in the animal house in standard wire-mesh cage under standard conditions with ad libitum water and a standard laboratory chow. They were divided into three groups .Group A, contains 5 rats, is the control group which did not receive any treatment throughout the experiment. Group B with 20 rats that received 5mg/Kg twice daily of 100:1 water extract of E.L roots. Group C with 20 rats received 10mg/kg twice daily of the same extract. The duration of treatment for both groups was 4 weeks.
At the end of the experiment, blood samples were obtained from all groups and analyzed for serum testosterone level (T) by using a commercial testosterone ELISA kit that was purchased from Abnova through Axon Scientific Malaysia Sdn.Bhd, kit number (KA0309). The rats were then terminated and prostate was removed totally and weighed then it was kept in 10% buffered formalin solution for 24 hours for fixation, the fixed prostate was measured for the length and width using a metric ruler.
The prostate was then dissected and routinely processed in a tissue processor and embedded in paraffin. Sections of 5 μm were cut using a microtome and they were stained with haematoxiline and eosin stain which were observed under light microscope for histopathological changes.
Statistical analysis was done using SPSS software version 20 to assess the results’ significance, the results of the prostate weight and dimensions were expressed as mean ± sem. Statistical analysis was carried out using independent- sample t test. P ≤ 0.05 was considered statistically significant.

The effect of E.L. extract on the weight, dimensions and T level in all groups is shown in table
1. The prostate weight has increased in both group B and C in comparison with the control group (A) however only group C show a significant increase in prostate weight as compared with group A and B (P<0.05). For the prostate dimensions, only group C showed an increase in the length and width that is statistically significant when compared to groups A and B.
The results also show a rise in serum Testosterone level in both groups B and C. Serum testosterone level of group C is significantly higher (P<0.05) than B and A.
Results of histopathological examination of the specimens are mentioned in table 2. Fig.1 represents the control group where we can see normal prostatic glands lined by a single epithelial layer. There are very minor changes in group B in comparison with the control group A, Fig.2 which are represented by the proliferation of prostatic glands that become more packed and compressed however they are still lined by a single layer of epithelium. Group C showed much more intense changes in comparison with both A and B. There was a prominent increase in the epithelial cell population of the prostate glands which is represented by stratification fig.3 and intraglandular villus formation fig.4. There are some areas where we observed mild epithelial dysplastic changes fig.3, 5 in the form of hyperchromatism , irregularity of the nuclear membrane and increase in the nuclear size these changes are equivalent to low grade PIN. These changes where statistically significant from group A and B. We also noticed an increase in the connective tissue stroma mainly in group C.

Natural products are an important source of drugs (Newman et al., 2003). Many people around the world especially in developing countries depend on traditional medicine for their primary health care. (Ji et al., 2009); (Fabricant and Farnsworth, 2001) However, little is known about possible side effects of treatments with these products. Therefore, an immense need exists to investigate the effects of these products. The safety of E.L. extract has not been widely studied but there are only few studies that have looked into this aspect. In a study done by Alsalihi et al 2012, stated that after consumption of E.L. root extract , normal blood hematology, clinical chemistry and histological examination of vital organs (kidney, liver and spleen) of mice showed no apparent change with the dose used. (Omar Saeed Ali Al-Salahi et al., 2012)
In this study, we found that the histopathological changes in the prostate gland are related to the level of testosterone, as group B do not show much changes and are comparable to the control group A, whilst group C show more severe changes and a significantly increased serum testosterone level .The changes that we found are indicating an increase in the proliferative activity of the prostatic epithelium and can be classified as low grade PIN.
Many studies have shown the relationship between increase in testosterone level, prostatic hyperplasia and PIN and it has been known for years that testosterone replacement therapy is related to increased risk of prostatic cancer (Claus Rolf et al., 1998).
Prostatic intraepithelial neoplasia (PIN) is a premalignant proliferation of the prostate. In PIN the cellular arrangement shows preservation of duct and gland architecture with the presence of atypical epithelial cells. The epithelial cells proliferate and crowd resulting in a pseudo-multilayer appearance. However, these cells remain inside the acinus and do not breech the basal lamina. Several architectural variants of PIN have been described, and many cases have multiple patterns. The main ones are tufting, micropapillary, cribriform, and flat (Montironi et al., 2007). PIN is classified according to the degree of cellular atypia into low grade PIN and High grade PIN, only high grade PIN has been shown to be a risk factor for prostatic cancer (Montironi et al., 2000). High grade PIN can be found in 85 to 100% of radical prostatectomy specimens nearby or even in connection with prostate cancer (Godoy and Taneja, 2008)
From our results we conclude that the use of EL extract has a proliferative effect on the prostate in doses where the testosterone level rises however we did not find any high grade PIN which is comforting since low grade PIN is usually not associated with progression to invasive carcinoma (Häggman et al., 1997)
What can be an issue is the significant increase in the size and weight of the gland which occurs in group c due to glandular and stromal hyperplasia which can progress to urinary outflow obstruction. Although the cause of nodular hyperplasia remains incompletely understood, it is clear that androgens have a central role in its development. Nodular hyperplasia neither occurs in males castrated before the onset of puberty nor in men with genetic diseases that block androgen activity (Ansari et al., 2008). Dihydrotestosterone (DHT), an androgen derived from testosterone through the action of 5α-reductase, and its metabolite, 3α-androstanediol, seems to be major hormonal stimuli for stromal and glandular proliferation in men with nodular hyperplasia. DHT binds to nuclear androgen receptors and, in turn, stimulates synthesis of DNA, RNA, growth factors, and other cytoplasmic proteins, leading to hyperplasia (Kumar et al., 2010). We can conclusively say that the use of EL extract is not free of possible side effects and that care should be taken especially when used by men of old age since with increased age comes the increased incidence of prostatic hyperplasia, PIN and prostatic cancer (Baade et al., 2009)
Fig-1. Microscopical section of prostate gland of group A (control) showing normal prostatic glands lined by a single layer of uniform epithelial cells H&E stain, x400 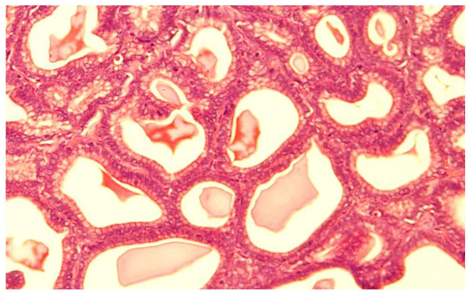 Fig-2. microscopical section of prostate gland of group B showing proliferation of the prostatic glands, the epithelial lining is still a single layer. H&E, x400 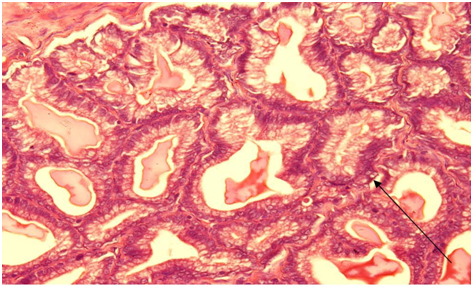 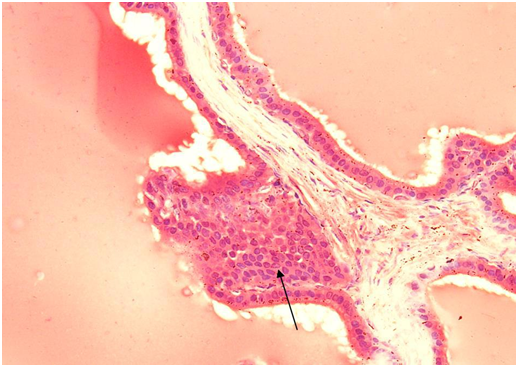 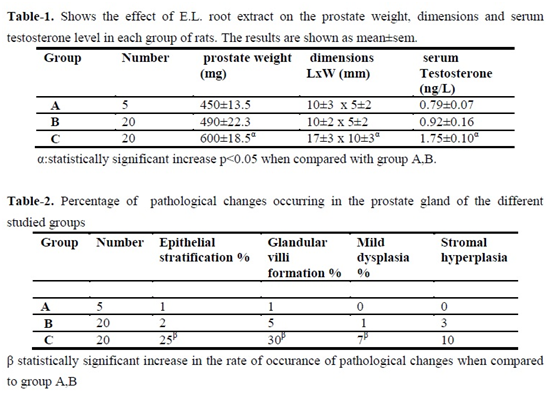 Sign in Create an Account
Lost your password?
Select the fields to be shown. Others will be hidden. Drag and drop to rearrange the order.
Click outside to hide the compare bar
Compare
Wishlist 0
Open wishlist page Continue shopping
Shopping cart close