Butea superba has been used to enhance sexual performance in men with unknown long-term effects on spermatozoa. This study aimed to investigate effects of chronic treatment of Butea superba on sperm motility and concentration in rats and mice in correlation with testicular damage. Adult male rats and mice were orally administered distilled water or Butea superba alcoholic extract (0.01, 0.1 or 1.0 mg/kg BW/day) for 6 months. At the end of the treatment the animals were sacrificed and the spermatozoa recovered from the distal cauda epididymis were analyzed for sperm concentration and motility in vitro. The testes were processed for histological examination. The results show that long-term treatment with Butea Superba Extarct significantly increased the sperm concentration and delayed the decreased motility with time. None of signs of sperm anomalies and testicular damages were observed. This suggests that chronic use of Butea superba increases the number of sperm, prolongs sperm motility in vitro while produces no changes on sperm morphology. Therefore, chronic use of Butea Superba alcoholic extract may be useful in fertilization.
Keywords: Butea superba, Kwaao Khruea, sperm motility, sperm count

Butea superba, known as “Kwaao Khruea Daeng” in Thai, has been used for physical and mental strength and for preventing age-related health problems. Thai traditional medicine uses Butea superba as a rejuvenating agent and to increase sexual performance in men (Suntara, 1931). The plant preparation appears to improve an erectile function in patients with erectile dysfunction (ED) without any apparent toxicities (Cherdshewasart and Nimsakul, 2003).
Fertilization in vivo requires adequate numbers of spermatozoa to be ejaculated with normal morphology and motility (Adamopoulos et al., 1996). Since spermatogenesis involves a complex process of cellular development, impairment in any of the development stages may lead to a reduction in the fertility. Long-term utilization of any sexual enhancers may affect the amount of and/or characteristics of spermatozoa resulting in altered fertilization capability. Therefore, this study aimed to investigate effects of chronic treatment of Butea superba alcoholic extract on sperm motility and concentration in correlation to testicular damage in rats and mice.

Butea superba tuber roots were collected from Phrae, Thailand, and identified by Associate Professor Yuttana Smitasiri, School of Science, Mae Fah Luang University, Thailand. The roots were washed and air-dried at room temperature. The root cores were separated and sliced into small and thin pieces. Then they were dried in a hot air oven at 50°C and grinded into fine powder. The powder was extracted 3 times with ethanol at 1:4 ratio w/v and stirred overnight at room temperature. The ethanolic extract was evaporated under reduced pressure at 45°C using a rotary evaporator. The extract was dissolved in distilled water before used.

Male Sprague-Dawley rats (8 wks) and ICR mice (8 wks) were obtained from the National Laboratory Animal Center, Mahidol University, Nakornpathom, Thailand. They were housed under a 12:12-hour light-dark cycle and maintained at 24 ± 1°C.

Sperm motility was assessed by the method of Bavister and Andrews (Bavister and Andrews, 1988). The distal cauda epididymis was dissected out and placed in 2 ml of equilibrated medium in a 35-mm tissue culture dish. A needle was employed to release the spermatozoa from the cauda epididymis into the medium. The spermatozoa were allowed to swim out into the medium for 3 min in the CO2 incubator at 37°C. Sperm concentrations were then determined. The medium was added to the culture drop for sperm motility assay providing a final concentration of 2 x 10(6) spermatozoa/ml. The tissue culture dish was placed under an inverted microscope (Nikon, Japan) and an observation was performed at a magnification of 20X within 1 min. The motility of sperm was observed at various time intervals up to 6 hrs.

The cauda epididymis was cut and weighed. A cell suspension was prepared by macerating the cauda in 1.0 ml of 0.85% saline. The cell suspension was kept for 24 hrs at 4°C. The suspension was then filtered through a double gauze layer and an aliquot of the sample was used for sperm count in a Neubauer hemocytometer. An aliquot of the epididymal sperm suspension was smeared and stained with hematoxylin and eosin and then examined under a light microscope (CH-2, Olympus, Japan) at magnification of 100X. The head and tail abnormalities (200 sperms per animal) were recorded.

The testis was dissected out, cut into small slices, and fixed in 10% formaldehyde buffer for 24 hrs. The tissues were washed free of 10% formaldehyde and stored in 70% alcohol until being embedded. The tissues were dehydrated in alcohol series and embedded in paraffin. Tissue sections of 5 µm thickness were prepared and placed on glass slides. The sections were stained with hematoxylin and eosin and mounted in mounting medium. The slides were examined under the light microscope. For each testis several cross sections composing of 20-50 tubule sections were examined for signs of interstitial edema, seminiferous tubule degeneration, and congestion.

Statistical analysis was performed using one way analysis of variance (ANOVA). If a significance was found, differences among individual group means were tested by the least significant difference (LSD) test. Values were considered statistically significant at P<0.05.

Motility of the sperms from the control rats and mice at time zero were about 90% (Figures 1 and 2). The movement gradually declined with time and reduced to 70% at 6 hrs in both species. Long-term treatment of the animals with Butea superba alcoholic extracts at the doses of 0.01, 0.1 or 1.0 mg/kg/day significantly delayed the reduction of the sperm motility compared to the control group. The motility of sperms from the treated animals remained over 75% at the sixth hour after being investigated. However, at the time zero, the extract-treated groups revealed no difference in motility compared to the control group. 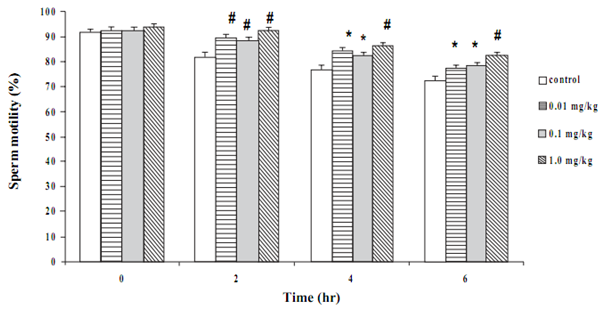 Figure 1 Effects of Butea superba extract on the motility of rat spermatozoa. Data are in mean ± standard error of mean (SE), n = 6. * P 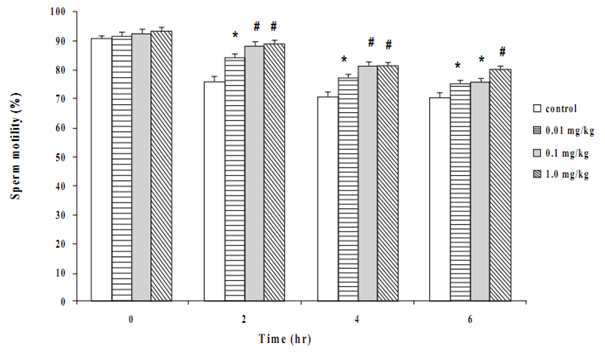 Figure 2 Effects of Butea superba extract on the motility of mouse spermatozoa. Data are in mean ± SE, n = 6. * P 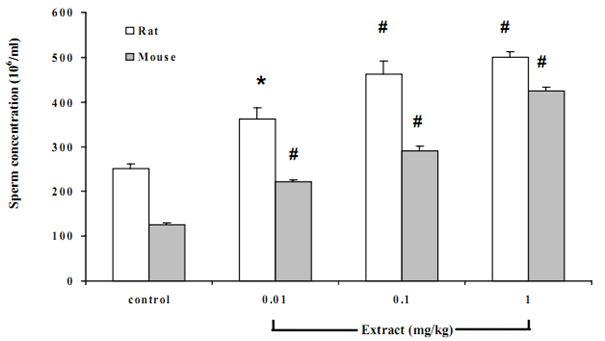 Figure 3 Effects of Butea superba extract on the sperm count in rat and mouse. Data are in mean + SE. * P

Long-term exposure of the animals to the extract revealed no changes on the spermmorphology. There were no significant changes in head and tail anomalies in the treated groups compared to the control (Figures 4 and 5).

Figure 4 Effects of Butea superba extract on the sperm morphology in rat. Data are in mean + SE. 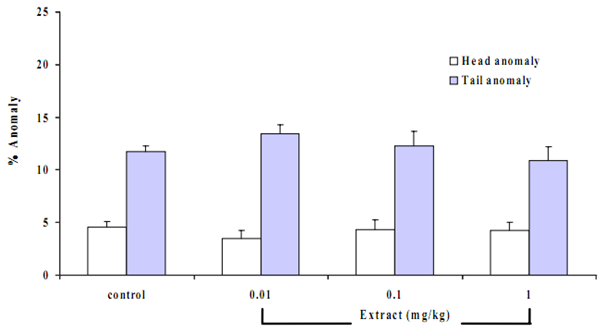 Figure 5 Effects of B. superba extract on the sperm morphology in mouse. Data are in mean + SE. 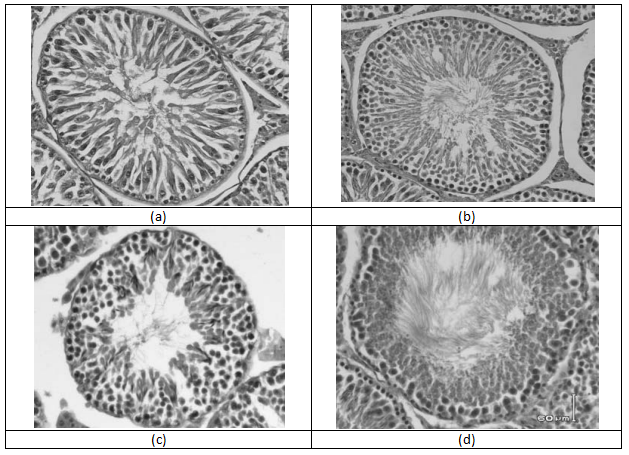 Figure 6 Micrographs of testicular sections from (a, c) normal rat and mouse and (c, d) rat and mouse receiving the B. superba at the dose of 1 mg/kg BW/day (H&E staining 40X). Figure 6 (a-b) and 6 (c-d) are representative micrographs of testicular sections of a control and a 1 mg/kg extract-treated rats and mice, respectively. The numbers of primary spermatocyte and spermatid of the extract-treated animals were greater than those from the control. However, there was no abnormal pathological sign observed in both the control and the treated animals. In the slide section from the treated rat and mouse, the germinal epitheliums were well preserved with all the cell types present (Figure 6 b,d). There was no vacuole in the epitheliums and the lamina of the tubules did not contain sloughed immature cell types. There was no sign of interstitial edema, seminiferous tubule degeneration or congestion.

Sperm motility has been considered as one of the most important predictors of fertility. Several reports have demonstrated the correlation of motion parameters with fertilization rates (Check et al., 1990; Liu et al., 1991). Adenosine triphosphate (ATP) is the main energy source of the sperm motility. A reduced ATP production and/or reduced ATP levels via ATPase hydrolysis result in an insufficient energy and poor sperm motility. This study shows that B. superba prolonged the sperm motility via unknown mechanisms. It is possible that B. superba may increase the ATP production and/or utilization. In addition, it cannot be ruled out that the plant may act on the nitric oxide (NO)-cyclic adenosine monophosphate (cAMP) pathway. A number of studies have reported involvements of the NO and cAMP in the sperm motility. A nitric oxide synthase (NOS) inhibitor (NG-nitro-L-arginine methyl ester) (Lewis et al., 1996) and a NO scavenger (methylene blue) (Donnelly et al., 1996) were reported to inhibit movement of human spermatozoa. Sildenafil, an inhibitor of phosphodiesterase V, increases the velocity and amplitude in human spermatozoa (Lefievre et al., 2000). Sildenafil also dose-dependently increases cAMP production in the spermatozoa. Human spermatozoa subjected to capacitating conditions increase their endogenous NO synthesis and their intracellular cAMP content. The cAMP synthesis is increased by NO releasing compounds and decreased by NOS inhibitors (Belen Herrero et al., 2000). These studies suggest an involvement of the NO and cAMP in the movement of the spermatozoa. B. superba has been reported to inhibit phosphodiesterase activity in vitro (Roengsumran et al., 2000). Therefore, it is possible that B. superba may also prolong the sperm motility by increasing the cAMP production. However, further studies are required to confirm the proposed mechanisms of action of Butea superba.
An assessment of a sperm motility loss over time is normally used as a quality control of an in vitro culture medium used in clinical analysis of Assisted Reproductive Technology (ART). Some laboratories employ sperm survival or stress tests to enhance the predictability of the in vitro fertilization rate (Alvarez et al., 1996; Coccia et al., 1997). Therefore, the motility results from this study are valid for further use in clinical study design of B. superba. The prolonged sperm motility in the culture medium by B. superba extract indicates that B. superba may be useful in infertile men.
The number of spermatozoa was increased by B. superba extract. This may be caused by β-sitosterol component in B. superba. The enzymes in the testis convert β-sitosterol to pregnenolone, an important substrate of testosterone synthesis (Subbiah & Kursis, 1975). The testosterone activates the release of gonadotropin-releasing hormone (GnRH) from hypothalamus. The follicle-stimulating hormone (FSH) and luteinizing hormone (LH) released by the GnRH induce the spermatogenesis and growth of spermatozoa.

Sign in Create an Account
Lost your password?
Select the fields to be shown. Others will be hidden. Drag and drop to rearrange the order.
Click outside to hide the compare bar
Compare
Wishlist 0
Open wishlist page Continue shopping
Shopping cart close